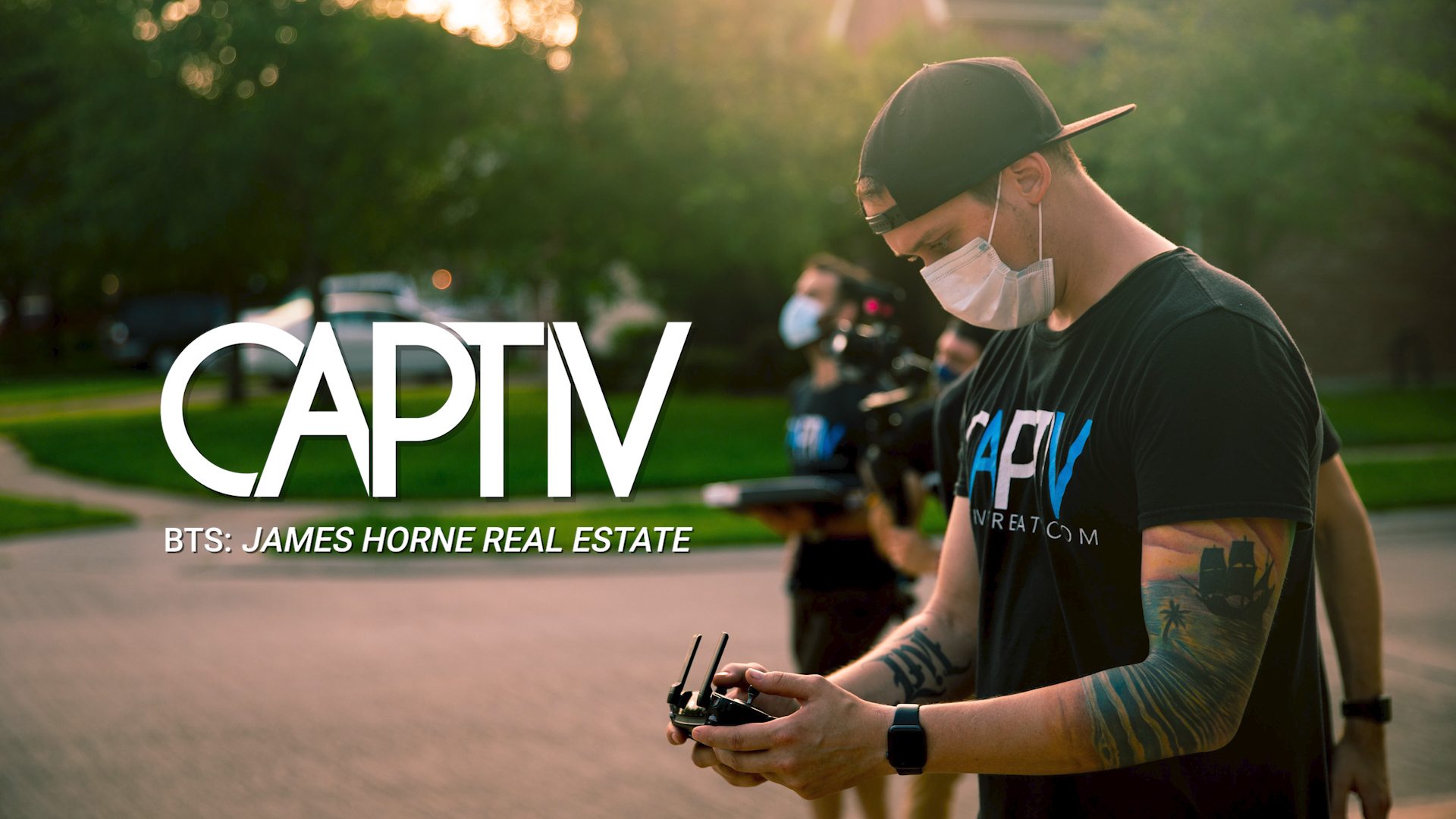 When James Horne reached out to Captiv to make a commercial, he sent his own script and he gave us the freedom to rework it if we wanted to. And I wanted something that was a little more fun and something in the vein of maybe a Geico or Progressive commercial, something with visuals that really stick with you.

The concept of this commercial is a couple is trying to sell their house, but they’ve entrusted a shady businessman. And so James Horne magically appears on their doorstep and offers them his services and all the wonderful things that he as a realtor can do to get the house sold.

Of course, with a big project like this, you want to storyboard it. So everyone kind of gets an idea. Well, first you, as the director, have an idea of how you want it to look and then to give everybody else an idea.

So with the current pandemic going on, it really changed the way we cast this particular project. When we were looking at all the submissions, I really had to pay attention to everybody’s reel, because I knew this project, it had a lot of dialogue and I knew I wanted a lot of facial expressions reacting to things. So I really needed to see who would be capable of doing that. And that’s how I picked Trey and Kayah as our main roles. And Patrick was already in the bag immediately for the shady realtor, because we’ve used him before on other projects. And he’s just really good at comedic improv and really just gets his lines right all the time. And he just had the right look and voice that I wanted.

Of course, James, as he’s the selling point, he’s not an actor, he’s a realtor. It was interesting trying to find that balance. We knew we needed actors that could help carry the commercial alongside of him. And you wanted to make sure his dialogue was on the point of the service he was trying to provide.

A lot of agents don’t go above and beyond in our industry, but the ones that do, really shine. And so that’s what I’m trying to create here is just level up my business.

The James Horne commercial is probably our most set-dressed and prop-heavy production that we’ve ever done. This ended up being a two-day shoot just because of the different locations. I wanted the house to look nice, clean, contemporary, and then the shady realtor’s office needed to look messy and 70s and dated and just cluttered and full of stuff. The blinds on a real window actually had to be removed and put up on a sea stand with the light shining through that. So that limited the amount of space we had. And for the very last shot of the commercial, it’s on a dolly. So that dolly track actually had to go into the office behind us through the door to be able to do that movement because the space was so limited.

So all the stuff at the house was actually shot in one day and that involved all up with the couple talking to each other, James showing up, the dream sequence, his epic speech, and then a drone shot

Day of the Shoot

So we had to arrive on set at about five in the morning just to get everything set up. So as soon as the sun rose enough, we could do all the dream sequence exterior shots.

The drone shot is a huge selling point. It’s in the storyboard for when he says, do drone shots in video, and we were committed to that and I had no other backup. It was right at the end of the day. So we’re out in the middle of the hot sun and everyone was trying to get it together. But I think came out pretty well.
You guys ready? Three, two, one, action.

Originally I wanted James to ride off into the sunset on a unicorn. That ended up not working out. Obviously the logistics of getting a horse on the set. And so we compromised and that’s how I came up with the speech that he does about the wind calling to him. So we can go into wide screen and as the screen gets wider and wider and the color changes, it becomes very dramatic. But then immediately goes back to normal where he says- “Or feel free to give me a call at your earliest convenience.”
And I thought that would be a more fun and memorable ending.

I think it’s one of my favorite things I’ve gotten to direct just because I got to write it. The cast was great. Trey and Kayah and Patrick were all super game to do whatever. This was one of our largest crew projects as well. We pretty much almost had everybody from Captiv on set.

I think that’s what helped it become a success. The fact that James was so game to do anything for his commercial, I think really helped. I think everyone just brought their A game this time.

I feel fantastic about this. This is awesome. I think it’s one of our best shoots yet. I think this commercial really shows the level of commitment and creativity that Captiv Creative has.

That is officially a wrap on your commercial, James. Woo hoo.

Work with Captiv on Your Creative Project

If you are ready to create content for your business, partner with a creative video production agency today. At Captiv Creative, we are creators at heart and are dedicated and experienced at producing high-quality content to boost your brand’s online marketing strategy.

For a better idea of what we can do for your business, submit your project or take a look at our demo reel. If you have any questions, feel free to give us a call. We’d love to hear more about your business and goals so that we can help point you in the right direction.

Behind The ScenesVideo Production
July 14, 2022

How to Hire the Right Production Team

The trend of video production is on the rise. Videos have become more important as…
Sam Rossiello
Behind The ScenesVideo Production
June 3, 2022

Video productions often involve all hands on deck, with many people coming together to create…
Sam Rossiello
Behind The Scenes
March 9, 2022

Watch behind the scenes of the EMOTION e-bike product commercial for Alco Electronics.
Sam Rossiello
Share